Intrigued? I thought so.

Do you remember the story about selling weed on Monkey Island? No? Then go read it and come back here. Pay attention to the boat.

You should be back by now, so we’ll continue.

My brother Larry and I were puttering around the lake and doing a bit of fishing by the gap. I would have been about 14 or 15. On our way by the government dock, we saw about 40 people fishing the pier and all along the tracks out to the gap. Anyone who grew up there at the time will not be surprised to hear that the majority of them were of Asian descent. The reason I mention their race is only for reference to what’s coming up.

The government dock is to the far right, just out of the picture. I have seen a lot of wrecked boats at the far left.

As we are going by the dock, we hear someone calling to us. It’s Ian, a local alcoholic and chronic welfare case. We pull up to the dock to see what he wants, and he’s already pushed his way through the Chinese families that were taking advantage of the endless supply of panfish in our beautiful lake.

This was when shopping was illegal on Sundays, what with organized religion running rampant throughout our fine country. No shopping, means no stores are open. That left a lot of people looking for something to do, and we were only an hour and a half out of downtown Toronto, so we would get van loads of Chinese families flocking to all of the public spots to fish.

This is new, fancy beer, but it’s close enough.

So anyways, Ian shoves his way through the crowd, calling the folks there every derogatory name you could think of, and he’s carrying a plastic shopping bag full of beer and a few cubes of ice. He’s wearing a dirty, threadbare t-shirt and a pair of frayed, cut-off jean shorts that didn’t leave much to the imagination. They were tight, and they were short. That’s fine on a lovely lady, but on a lanky streak of piss dirtbag, it was far from fetching. He’s slurring pretty good, and he’s telling us that he wants to go for a ride in the boat. We explain that we don’t have very much gas, and we don’t have any money. He hands us a two dollar bill, which would put enough gas in for at least an hour, and says we can have some beer and smokes if we take him.

Well, when you’re a young teenager, cigarettes, gas, and beer goes pretty far on the bargaining table. So Ian climbs in, yells out a few ethnic slurs, and we start to go. I said we were sorry to the people on the dock, and Ian told us in a very loud voice, that they were stupid and didn’t understand English.

One thing you should know is that we spent almost every summer day on that lake, and we used to snorkel around picking lures off of the roots, so we know a thing or two about the Chinese fisherpersons. They, for the most part, speak fine English, but when we tried to tell Ian that, he started yammering at them in belligerent, fake Chinese. This time Larry apologized and said we would get him out of there. Ian sat in the bow, right where our tackle boxes were, Larry sat in the middle, and I sat in the stern and managed the controls. After we got fueled up, Ian gave us a beer, and I had a smoke with him. I remember him pulling the flattened pack of Mark 10s out of his back pocket. He then pulls his lighter out of the beer and ice bag, but it had gotten wet and he couldn’t get the thing to light. Larry fixed him up, because we were experts at making fire with cast-off lighters, and we were sober.

So we’re out there tooling around the bay and Ian decides it’s time to go home. We are all in agreement of this, as there is no more beer, and he was starting to get a bit creepy. Why we thought that a thirty something year old alcoholic in a boat, supplying a 12 and 14 year old with beer and cigarettes wasn’t creepy to start with, I’ll never know, but when he started talking about all of the pretty, young teenaged girls around, we knew it was time to git. He was also falling down drunk by now, and I had a pretty good buzz. Larry only had one, because come on, he’s only 12 for fuck’s sake.

As we are pulling into the dock, he’s incoherently bellowing at the Chinese people, and drooling on his shirt. Larry then points out something to me that nearly made me gag.

One elongated, hairy testicle was hanging out the side of his Daisy Dukes, and it it was sitting dangerously close to Larry’s Rapala. At that time I looked back at Larry and he’s grinning, but looking back at Ian. I’m holding the dock, and as I look over to what has him concentrating so hard, I see him dragging that treble hook up and into Ian’s sac.

He sobered up right quick after that. The best part is he was trying to climb out of the boat, dragging the rod, and yelling about how bad it hurt. Then, he starts ordering the Chinese people to help him, but they were too busy laughing at him.

When we saw him again, he asked what had happened, and we told him he sat on it, but it didn’t stick in until he got up. He believed it, but said he wasn’t going for any boat rides anytime soon.

Here’s a little tip I would like to relate, big fish bites if ya got a good bait,

Linking this masterpiece up with Yeah Write. If I did things right. Whaddya say, Flood? 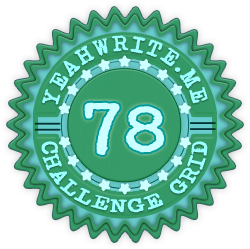