I guess I have since I was a kid. I can remember driving around with my dad, a shotgun pointing at the floor, and me being so excited to be doing man things, that I would be just vibrating. He would let me wear his old hunting coat and/or hat, I would drape it over my tiny body, and off we would go to see if we could get a couple of grouse (what we always called “partridge”), a coyote, or maybe even a few rabbits.

These were great fences, because the grouse would often walk back and forth on them, “drumming” for a mate.

We would drive all over the back roads, going particularly slow when there was an old split rail fence or some other spot that had good visibility. Dad would watch the driver’s side, and I’d watch mine, but he got to do all of the shooting, at least until I was ten or so.

We would almost always run into someone that he knew out there. Lots of times it was someone taking their kid out for a Saturday morning drive. They would talk about what roads they had been down, where they didn’t see anything, and where they had seen the game warden. You know, the usual stuff. It only took me one time to find out that you weren’t supposed to tell someone where you had shot something. Dad was explaining to a guy that we had got a grouse in a spot that was nowhere near where we had been. I piped in with a “No, Dad. Remember we were over by the gravel pit? Remember we haven’t even gone that way yet today?”

That was when it was explained to me that you aren’t supposed to tell people where you shoot all of your partridge, because then they’ll come out and hunt your secret spots until there isn’t any game left to shoot. I was also told to never disagree with him when he was talking to someone else. This also proved helpful when he was trying to get me into something for free, or for a cheaper rate.

As a lot of you know, hunting seasons are usually in the colder months, so when there was no hunting, there was gathering. In the late spring we would drive around and pick fiddleheads, asparagus, and morels. Morels were my favourite, and the fact that they were so hard to find might have helped them to attain that rank. With the other two it was easier to find patches, because you would drive around in the summer looking for berries and make note of where the fully grown ferns and asparagus plants were. You then come back in the spring to keep an eye on them until they are ready to harvest. By the time us kids were back in school would be when we would start looking for puffballs.

They have to be pure white inside. If there is any hint of colour in the flesh, do not eat it. Fry up some thin slices in a bunch of butter, and enjoy.

This is what the finished product looks like. So God damned delicious.

I can remember my sister being disgusted with us for going out and picking wild edibles. She said that it made everyone think we were poor. I had never once thought of it like that. Sure we were poor compared to a lot of people, but we also were doing way better than a lot of the population. For me, it was a lot of fun to go wandering around the ditches and woods as a kid, and maybe Dad was just being cheap, but I don’t think so. There was a sense of satisfaction when we would find a good patch of something, and get to bring home a bounty of things that you couldn’t buy in a store. it made everything taste better, and if we got enough of something, then Grandma Bird, or Nana and Papa would get to have a bunch as well.

These are the things that always made me happy, and I can’t remember anything negative about what we were doing. I still love hunting for wild foods to this day, and I love sharing that with my wife and girls now. In the spring we went and picked fiddleheads, and I got to explain to them that they shouldn’t take the whole plant, and why. When we took a bag full home to Mom and Paul, they explained to their nana that you aren’t supposed to take all of the fiddleheads, because the plant needs some to keep growing, I felt as proud as any real dad out there at that moment. Do you think that they will be picking fiddleheads when they get older? I doubt it, but at least they know that they can, and maybe one day they’ll be walking by the creek with their kids, look down and see a cluster of baby ferns, and tell them about how their papa used to take them when they were little girls to pick these, and then he’d take them home, boil them up, and eat them. (the ferns, not the kids)

I guess if I’m lucky, the girls will pick some and bring them home to Mrs. Birdman and me. I’d clean them and cook up a feed for everyone, but I would of course be the only one eating them, because no one else in the family can stand vegetables, wild or otherwise.

Everyday ‘fore supper time she’d go down by the truck patch, and pick her a mess o’ Polk salad and carry it home in a tote sack,

I’m linking this post up for Yeah Write Challenge Grid #77. If you don’t know what Yeah Write is, you should head over and check it out. There are some amazing writers there, and they spin some great yarns. 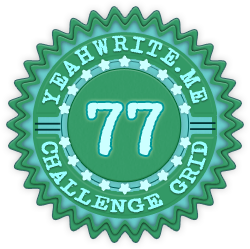