I worked at an egg farm for a while as a kid. When you pick the eggs, they go in “flats”, and each flat has 30 eggs in it. This story is about some of the flats that didn’t make it to the stores, and the makeshift adventure that they went on.

When I was in grade nine, there was a new kid in Harwood named Pokey. Pokey was, well, he was pokey. He was a really nice guy that was from some fantastical place. Possibly Burlington, or Hamilton, or maybe even Peterborough. He had a really cool RC boat, and he had a mom and a step-mom, but maintained that they were just friends. They ate perogies, and one time they let me have perogies too. Mmmmmm, they were good.

Shortly after school started, Halloween came along. I decided that this was going to be my crazy year for egging, soaping, toilet papering, and other forms of hellraising merriment.

From my place of employment, I procured three or four flats of eggs, and from the local store, I got a bunch of toilet paper and a three pack of Ivory. These things I had to get weeks in advance, because living in a village and buying those things so close to Halloween, would automatically put you under great scrutiny.

So, Halloween night comes along and Pokey and I hit the ditches in our black outfits, complete with Balaclavas and black knapsacks. I had the eggs in a shopping bag with some toilet paper, and the soap in my pockets. I’m telling you, we were fucking stealthy. Our first order of business was the gas station. That arsehole took a lot of abuse over the years at the hands of me and a few friends, but believe me, it was warranted. The sad thing was that he was the first Newfie I had ever met, and that put them all in a bad light for years, until I had met several hundred more, and realized that he was an exception. Most of them are the salt of the earth.

Now, Pokey had brought a bunch of supplies too: lighter fluid, firecrackers, and cigarettes were among them. After we had thoroughly egged and soaped the gas station, we started lighting the rolls of toilet paper on fire in the street. What we should have made sure of, was that the guys giving out candy at the fire hall had gone home. There were still a few of them shooting pool and having a beer inside. They were probably 200 yards from where we were lighting piles of paper on fire, and laughing like a couple of idiots. As we made our way towards the park, because you don’t want all of your fires too close to each other, we saw the fire truck pull out and drive to the fire. They got out and stomped the flames until there was nothing left. We, because we were ninjas, leapt gracefully into the ditch, while Ronnie and Bob yelled into the woods that this shit wasn’t funny, and they knew who we were.

FUCK! They probably did know who I was at least. Pokey was new, so he would be safe, but I’ve known these people all my life. My dad was on the fire department for years, and I believe he left with the rank of captain or something like that. I was going to get it when they told on me.

Now Pokey, being from a wondrous and magical place, knew better. He explained that they would have called my name if they had known it was me, so they were just bluffing, and as soon as they leave, we could light some more up. I thought that was a good idea, but we should probably go hide in the woods for a bit. He agreed, and we started into the cedar swamp between Drope’s field and the park.

Bad idea. I smacked into a tree with the shopping bag and most of the eggs broke. I didn’t realize it at the time, but it was apparent later when I reached in the bag for another roll to burn in the street. Oddly enough,, as we were standing there, we saw the flashing lights again, and they were coming a lot faster than a fire truck.

I was standing with an egg soaked roll of shit tickets and probably a deer in the headlights look on my face. Luckily it was encased in a ski mask and I wasn’t going to have to look at an artist’s rendering on the post office wall next week. I threw the roll at the police car, but it came up short. The dull splat was overpowered by the police PA telling us to stop where we were. I say we, but it was just me. Pokey was long gone. I hightailed it into the swamp and the cops took off down the street to wherever Pokester ran to. I went back into the woods a bit and then couldn’t see what was happening, so I climbed a cedar tree and hung on to the top while I looked out at the road. That was when the spotlight blasted me in the eyes.

You would have thought it was a laser, the way it knocked me out of that tree. Down I went with a dripping bag of eggs catching on the branches all the way down. When I hit the ground, I took off running through the black muck, across the field to Bugsy’s house.

Black mud to the knees and egg all over, I assessed and cleaned up in Bugsy’s backyard. I couldn’t hide all of the cuts and scrapes, but a good hosing down, and I was able to get rid of that evidence and think of a story to tell Mom and Paul. She might buy it, but he would know for sure.

Boys and girls of every age, wouldn’t you like to see something strange,

Linking up with Yeah Write this week. Check out the talented bloggers and writers over there. 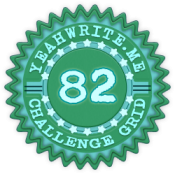