Now I feel sick, and there is nothing I can do about it. Well, that’s not totally true, there are actually several options. What I should have said was that there is nothing I can do legally. What I want to do is go for a drive down to PA and look up Youngman Brown. Then I’d go and talk to some private investigators to see if we could place an address and a name to this number. Then…

But I’m not going to do any of that. Partly because I’m not allowed, but mostly because I made the mistake of phoning and leaving a message for this goof. It started out calm enough, I guess. I said that I knew about the dirty texting to a little girl, and that I was giving the information to the police. What happened next was not in my cue cards. I ended the monologue with something along the lines of “…then I’m going to come to Philadelphia and find you, and f***ing kill you.”

I know, not my most creative work, but you didn’t see her tears and the fear in her eyes. You didn’t have to calm her sobs because they were making it so she couldn’t breathe, and because you were afraid her little sister was going to hear and get upset as well. You didn’t have to tell her that this person was far away, and wouldn’t ever find her because he can’t cross the border and her number isn’t a real phone number.

Just like his probably isn’t… but there was voicemail, so maybe.

For all I know, this place in Philly is just a company like Text Now, and they have no way of knowing who is assigned to what number, or what those people are writing to each other. I think they should know. I think you should have to somehow prove who you are before you are given a phone number. I had to. I had to jump through hoops to get mine.

That did it. That’s the statement that made me see red. Some scumbag has just stolen a ten year old girl’s innocence. Up until this point she thinks she’s talking to her girlfriend. She has sent a couple of very innocent photos of herself, and the nasty one was of her in a lifejacket and a bucket hat. You know why? Because she’s ten.

Ten year old girls aren’t supposed to know what kind of sick crap is going on in the world, and they are certainly not supposed to have to deal with it. They are just supposed to play with their friends, start liking boys, and piss their parents off. That’s it. Not one ten year old should know that to an older person “nasty” means sexual, and that some people would exploit them to get those kinds of photos, but they have to know. To protect themselves, if for no other reason.

I think the worst part for me, was having to sit there while her mother explained what this person was doing, and how good she was to immediately tell us when she knew something was wrong. I had to listen to her explain that this person wanted to see a picture of her private area, and that she should never give anyone pictures of herself online. We then had to tell her the dangers of showing people anything on the internet, and in real life, because once you give someone something, you can never get it back.

I didn’t tell her these things. I didn’t tell her that I would die protecting her if I had to. I would do it, but I didn’t tell her that. I guess the reason is that she is going to have to deal with a lot of twisted crap in her life, and although I want to shield her from everything that is evil, I can’t. I can’t, and I shouldn’t promise something that I can’t deliver. Instead, I asked the officer to explain to her that this person was in another country, and wasn’t going to be able to cross the border, even if they did know who it was. I think it helps to have someone whose job it is to protect us, tell a child that things are okay.

The officer I spoke with about this has assured me that she will do whatever she can, but that so many of these people can’t be found, and if they are, you can’t prove it was them that actually sent the text. I guess that’s the problem these days; we have all of this wonderful technology to help us along, but it is also a bane on society in that it allows way too much anonymity among us. Nobody needs to be held accountable for their actions, because no one will find out it’s them.

Well, I know it’s you, pervert, and I’m going to text you every day until you respond or you give up that number. 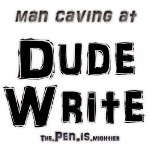 *I am submitting this post to Dude Write this week. Please check out all of the awesome writers over there. We rely on you guys to read and vote on our stuff, and while I understand that it’s a pain, we really do appreciate it. Voting starts on Monday night and ends on Tuesday. I`m not telling you to vote for me, just pick your three favourites and click vote. Also, if any of you dudes out there want to submit, you are more than welcome. You don`t need an invitation*