There wasn’t a cab driver in Cobourg that didn’t know that address in the 90’s. Some of the best times, with the best people happened right there. I don’t remember the exact circumstances of how I ended up being invited over there, almost every night, but I think it had to do with Mickey and the boys eating at the restaurant all the time.

It was a constant party there. I mean it. Someone was drinking there every night of the week. It was crazy. We did a lot of stupid shit at that house, like building a potato cannon and lobbing whatever fruits and vegetables we could stuff into it over the houses towards the lake. It was a few streets back, so I doubt any of them made it, but when you are hammered at 2 o’clock in the afternoon, your trajectory knowledge of Lysol propelled produce is not at it’s peak.

I remember the day that Rocket and I finished the cannon. We were so excited, that we couldn’t wait to go to the store and buy potatoes, so we raided Mick’s fridge and cupboards. we got peaches, lemons, apples and potatoes. We had a cut off hockey stick as a ramrod, and an electronic BBQ sparker as our ignition source. It was pretty slick, let me tell you.

Similar, but different. Ours was not so polished looking.

We sat in the backyard at first, clicking the sparker incessantly, but nothing was happening. We fiddled with the points and got them to where they were sparking with the chamber open, but as soon as we sprayed the Lysol in… nothing. Someone, probably Joe, handed us a can of ether, and figured that would work better. It didn’t, right away. I was walking back to the house, defeated, and clicking the sparker while aiming the cannon at Mick’s little shed, when all of a sudden THOOOMP!!! The potato went right through the front door of the shed, leaving a fist-sized hole in it. As Rocket and I cheered the fact that we had made something that worked, I saw Mickey running by with the speed and grace of a springbok. I turned to the crowd on the deck, grinning from ear to ear, when I saw Joe’s alarmed face.

The bike, being his brand new Eddie Lawson replica. His baby that he pre-ordered from the factory and tracked the whereabouts of, right from Japan to the dealership.

I don’t think he had a book carrier, but there was a huge stack of Playboys there, so you never know.

I started running towards the shed, screaming apologetic slurs at the lanky prick with the tearstream floating behind his head.

He was at the door. Oh please, oh please be okay.

It missed the bike by a foot and exploded into a bunch of tiny potato chunks. (Which, incidentally grew some potato plants by the shed door the next year. Win-win) The bike was unharmed, thankfully, and the revelry continued with us shooting groceries all about the land.

The last time I saw the cannon, it was leaning in the corner of the basement. It was just a husk of the weapon that it once was, and it brought joy to my heart as I reminisced about the fun we had with it.

I believe it was the same time that Joe had found a friend’s camera in his car, after going to the motorcycle show in Toronto, so we went to the basement to take sexy pictures of me in my homemade plaid boxer shorts thong. This was long before digital cameras were commonplace, and it turned out that her mom had taken the film in to get developed. Needless to say, I wasn’t invited over for Thanksgiving dinner.

I have quite a few tales about that time in my life and those friends, and because Mrs. Birdman has told me that I need to tell them, you can expect to see a lot more of these stories in the future.

We fired our cannon ’til the barrel melted down, so we grabbed an alligator and we fought another round,

P.S. We don’t have a topic for Therapy Thursday this week. Just putting that out there.

I’m submitting this to Yeah Write for their 83rd edition of awesomeness. Go check them out to read some great stories from some great writers. 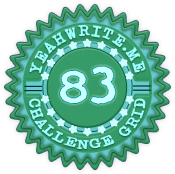